1ST WHEEL TO WHEEL RACE JITTERS — BEEN THERE DONE THAT!

1ST WHEEL TO WHEEL RACE JITTERS — BEEN THERE DONE THAT!

Dealing With The Wheel To Wheel Jitters

As a competitor in Time Attack for the last 6 years, I’d like to think of myself as a fairly compeitive driver.  My comfort level behind the wheel and car control are well within the realms of a pretty decent driver.  Heck, I’m also an instructor for one of our local track day programs.  Driving fast for the best lap times is what I know, and what I do best.  Driving wheel to wheel with others that want my spot or won’t let me take theirs, diving into the first braking zone with 10 other cars at the same time, and forward thinking of managing fuel and tires to complete a 30 minute race…NOT USED TO THAT!!! 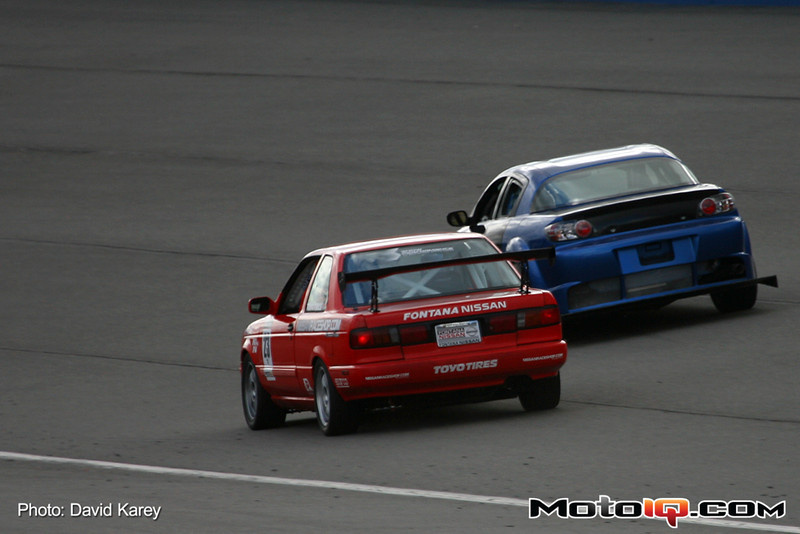 Not only was this my very first weekend with an new car, but it was my very first wheel to wheel race.  I have no apprehension of admitting it…yeah, I was a little freaked out!  It was a new car that we hadn’t had time to shake down.  I had six years under my belt behind the wheel of a high horsepower all-wheel drive car…and now i have moved into a low horsepower, but much lighter front wheel drive car.  The motor was just fired up for the first time a week prior, and the transmission was put into 2nd gear for the first time this weekend.  We could only pray for the best.  With a great team behind me to worry about all the little nuances of running a race car, I was able to concentrate on what I should be…driving. 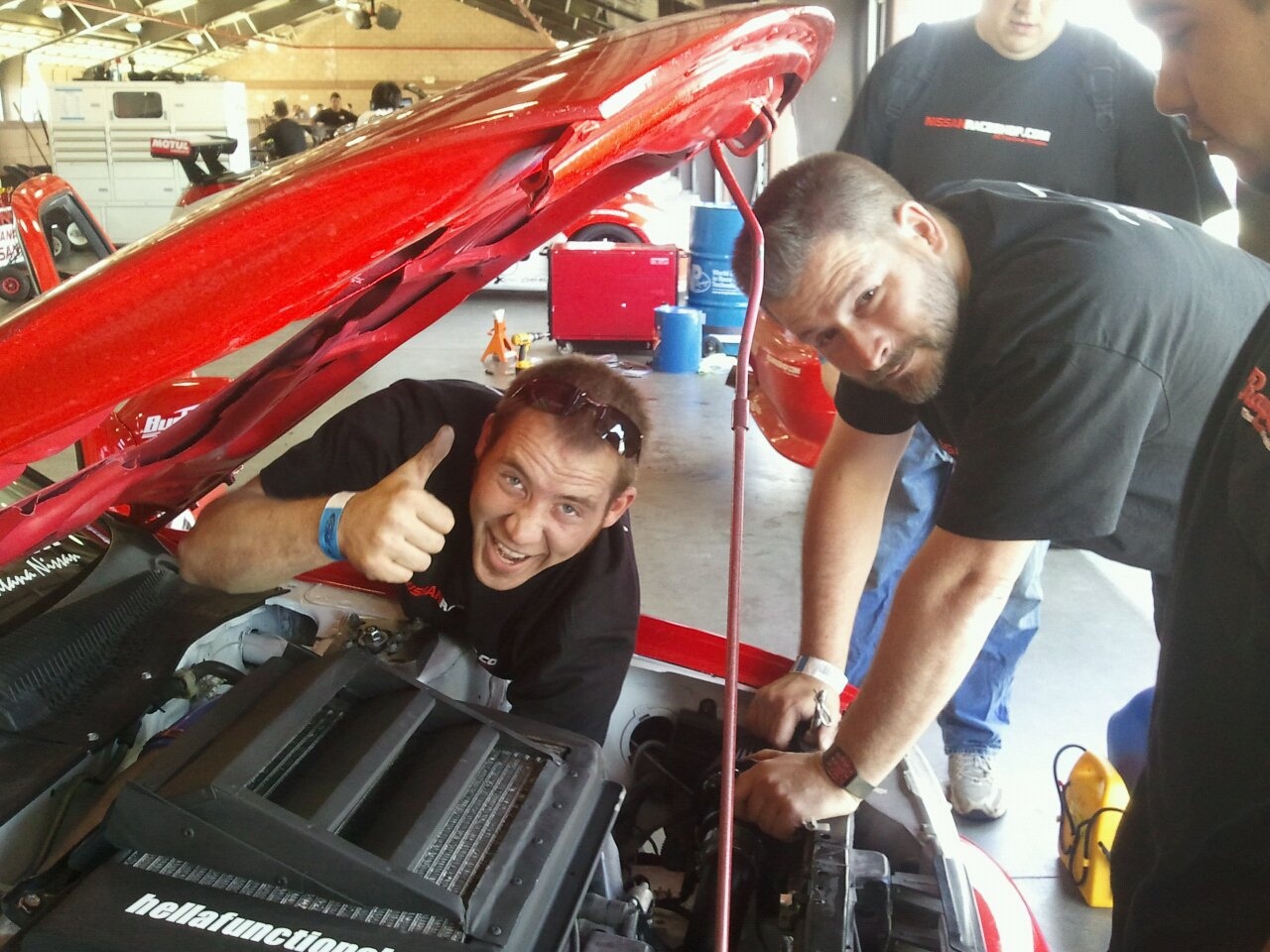 I had many sleepless nights before the event…and I kept thinking of only one scenario…what would I do when we all come in together at the first breaking zone at the start of the race?  How would I react?  Would someone spin? Would I screw up?  Would it turn into an 11 car pile up at the end of turn 2?  I had to plan for different scenarios…do i back off, and let the massacre happen in front of me and then put put around the carnage?  Or do I step on it and be one of the first to hit the corner?  Did I have the power to do it?  Could I do it?….too many questions…too many what if’s and what could’s.

As we rolled up to the start/finish line which would be the first of my career, I thought 4th gear would be the appropriate gear to start in….and that was my first mistake!  As the green flagged waved…everyone started to pull away from me…awe crap!  Wrong gear!!!  Downshift to 3rd and my car came alive.  Boost kicked in and it brought me alongside the others.  There I was, in the banking along side the others…I had to earn my spot or someone would take it from me.  I slid in behind one and in front of another.  I must have a bit more power than some of the others in my class because I seemed to move up a spot or two. 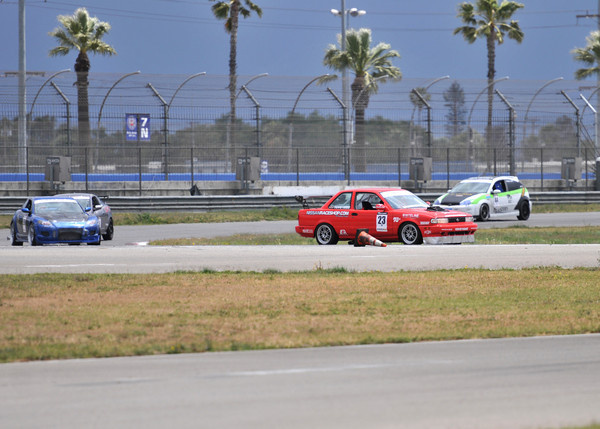 As we approached the first braking zone, my worst fears came true…one of the cars spun under braking, tried to correct, and then spun the other way.  With a car in front of me and one directly behind me, and up against the wall…there was no where to go but watch.  I was the lucky one…to my left was Mike Kojima who slammed on his brakes and didn’t have room to move…and t-boned the car that spun.  I was able to go around the mess and made up a few spots in the process.  Yes!!!!! I made it through without damage…the first corner…of my first race! 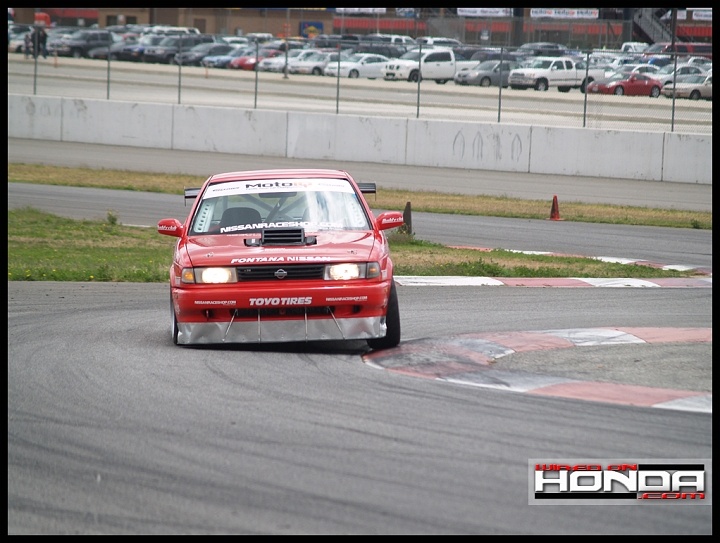 After that, I was back in my comfort zone…we had spread out and it was time to drive fast.  As we charged the infield, the car ran strong…although not the fastest in the corners, I was able to make up ground coming out of the corners and on the straights.  1st through 3rd gear this car was a monster!!!  I could literally see the others getting closer as I mashed the pedal to the floor.  All was well until we hit the front straight…4th sputter and 5th gear cutout.  The Gremlins had found me…fuel issues prevented me from fully utilizing my top end…simply a killer on such a high speed track.  Any ground I could make up in the infield was lost on the banking as I saw the others just pull away.  I was prepared for this as we had been trying to fix this issue all weekend.  At that point, knowing I could not keep up, the goal had changed to just “finish the race”.

Somewhere near the middle of the race, I noticed severe shaking in the steering wheel starting in the banking of turns 1 and 2.  I literally thought a wheel was coming loose.  Rather than chance my safety or that of my fellow competitors, I took the car off the course.  I was able to come in on my own power without a tow…but due to my transmission overheating, I could not continue the race.  A DNF for my first wheel to wheel race is not exactly the way I wanted to go out…but I have to say I’m grateful that myself and the others finished the day without any serious incidents. 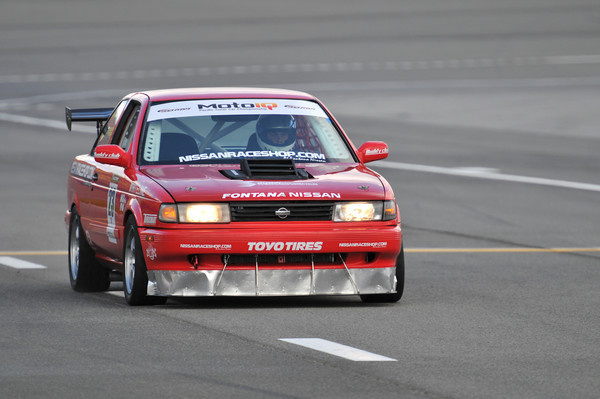 My expectations were met…the car ran…and it ran strong.  It didn’t blow up and I didn’t die…so that’s kinda cool 😉  Looking back at the weekend…first race, new car, new motor, new trans, new drivetrain….and only two real issues with the car to sort.  Not a bad way to start the season!  What’s next?  Prepare for the next race!  Now we know what to work on….now we know what to fix!  We’ll be back at Willow Springs in July…and things will be different.  Watch out guys…here comes the SHART!!!! 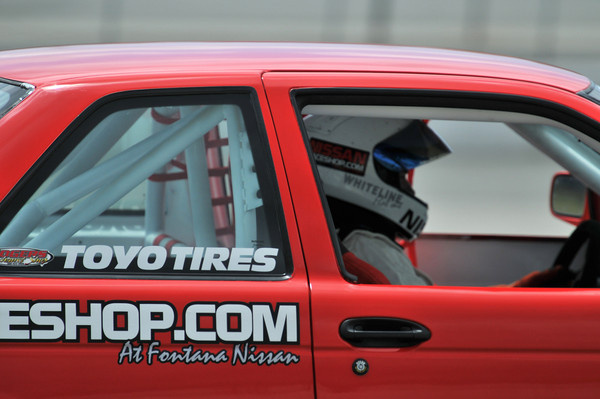